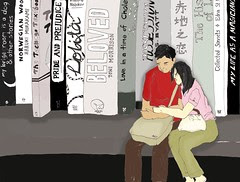 Tym tagged me with a book meme but I got stuck at the first category - "One book you have read more than once". Most of the books I've read more than once I've mostly read because I was a student: Don Delillo's Ratner's Star and Libra; Norman Mailer's Armies of the Night and J.D. Salinger's stories. These were what I wrote a masters dissertation on, none of which I feel like re-reading now. Almost 10 years later, Delillo confuses, Mailer tires and Salinger would probably bore!

This is definitely not what Yambo would say. 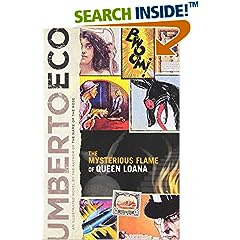 Yambo is the protagonist in Umberto Eco's new book The Mysterious Flame of Queen Loana. He is a 60 year-old trader in old books wakes up from a coma with a memory only of "public" things and ideas. At the beginning he expresses feelings only in hackneyed phrases, but also extended metaphors and phrases from all the books he has read. Like a child who already has a stock knowledge of the world and an entire literary encyclopedia, he nonetheless has to re-create his relationships with these words and ideas. And beyond negotiating the world through these residual words, there are also tastes, smells, sights, habits, family, friends and loves and - ultimately - himself. What is a person but the sum of his memories - experiences not only stored but also constantly re-created and re-lived as we continue to think and act?

2 days ago I was reminded, not of a book, but of a film I have watched and re-watched at least 10 times. J during one of his free afternoons had dug out and watched an old DVD of mine - Stanley Kwan's Centre Stage. It was a film that showed as much of Kwan's love for film making and the early years of Chinese cinema as it did of the lives of one of China's earliest and most tragic movie stars Ruan Lingyu. 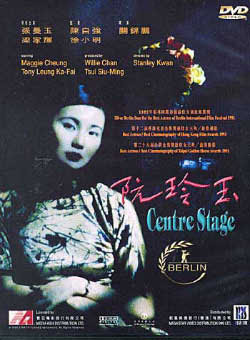 I think it is still top on the list of my favourite films. The first time I watched it was alone at the old Broadway cinema at Ang Mo Kio in 1992. That cinema is now no longer. Although it must have been almost 10 years since I last saw the film, as J told me about his experience, I was surprised I could still remember almost every scene and its lines. The names of the Chinese directors who were featured, their expressions, their gestures, the gorgeous wallpaper and cheongsum (what art direction!), the sounds and Shanghainese chatter, the old movie stills and snippets, the inspired instances of meta-cinema, the beautiful Maggie Cheung, and that slightly bleached light in the film that is memory.

Memories of books and films are seldom shared or public memories. Reading a book and (for me, at least) watching a film are private experiences, private relationships you forge with a narrative and its characters and ideas. In every reader and filmgoer's mind, the words, images and sounds take on different and new lives. And this is what I enjoy most about books and films. Yet during that conversation with J about Centre Stage, I also realised how enjoyable it is when what was experienced in solitude can be shared. And in realising this, I start to remember too that all my best friends were made from sharing memories of films and books - memories that were first happy in their own solitude, and only then, happier to find company.
books

sUdkeOki said…
yp!
that's why i cannot not pull anyone along for a film/theatre/exhibition...
a class on 'Audience Studies' also proved that the reading of any 'text' is enriched with company.

not sure if ur more into stanley kwan's film on ruan lingyu, or on the films with her in it. but do check out "The Goddess" (1934). it's amazin how much it gripped me as a silent piece. Pure black n white takes, sharp camera angles, quick cuts, lingyu's powerful acting - awed me of the golden age of Chinese cinema. And with the live piano, it just drove me to tears.
11:14 pm

ampulets said…
for me, most of the time, I prefer going to films/theatre/exhibitions alone! but after that, i'll always have friends who have seen the works and are happy to discuss whatever it is.

yah, i saw "xiao3 wan2 er" (playthings? little toys?) once at the Esplanade, also with live music arranged by Mark Chan and with some HK musicians! It was a great evening. And I think I have 1 or 2 other films on VCD at my mom's place. Just let me know if you want to borrow them.
11:30 pm 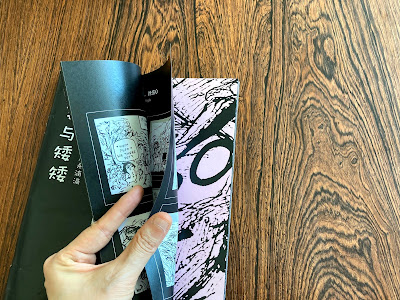