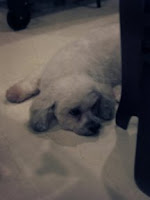 My mother has been crying over her dying dog, a white peek-a-poo (a cross between the territorial pekinese and the yappy poodle) whose fur around his mouth and paws has turned a strange maroon and pink and whose eyes are cloudy with age. Now that its kidneys are failing, it cannot eat. Still, it seems oblivious to its ill health and continues to try to lift itself up from its bed. My brother E, who is the original owner of the dog, is a stoic about the dog's dying. "I mean, it's led a good life thge past 13 years, there's nothing more we can ask for."

Of course, what is a good life is relative. The standards shift. Even the markers change.

For a dog, a good life probably means regular meals, regular walks, no abuse, and lots of human company and love.

Last evening, J and I braved the weekend crowds at Vivocity to catch Malaysian filmmaker Ho Yuhang's 3rd feature Rain Dogs. I haven't seen any film from across the border, except The Last Communist, but J had read about the film from the Serangoon Rd notetaker and it was enough to pique our curiosity.

Produced by HK Focus Films, Rain Dogs is extremely well-filmed (beautiful cinematography, not a scene out of place or mis-timed) Perhaps because we walked into the cinema with no expectations, we were pleasantly surprised by the sensitively paced film, and a well-casted ensemble that did not distract at all with any awkward over-acting and included "Ah Chan" (remember the actor for played the character"Ah Chan" in that famous Hk TV drama serial Man in the Net starring also Chow Yun Fatt?).

First, an overview. It's a coming-of-age story in every sense of the genre. College-bound Tung catches a glimpse of the city grit when he visits his elder brother (who bears a resemblance to Taiwanese actor Zhang Zheng) in Kuala Lumpur. Elder brother then plans to buy a flat and re-unite his family in KL, bringing his mother away from a life of loneliness and desperate dependence on a money-hungry boyfriend. Tung later returns to his quiet Malaysian small town. But he is quickly called back when his brother is knifed to death in a snooker parlor brawl. This marks the film's turning point. For fatherless Tung, the good life has so far been his fishing excursions with an older man and midnight adventures setting off fireworks at the train station with friends. But the KL jaunt has initiated him into a world of macho fights and cigarettes. He tastes anger - always potent for a young man. After an argument with his mother, he runs away to his uncle's coastal town where he discovers the next likely misadventure for a young man - girls (and guns).

It is to Ho Yuhang and his scriptwriters' credit that they did not milk this story dry for all tragic possibilities. There is a sensible restraint, a good line back to the sort of understated realism of the Taiwanese indie. There is Odetta's "Sometimes I feel like a motherless child" refrain in the soundtrack, but this still doesn't qualify the film for melodrama. It is also to his credit that he shoots a Malaysia in all his city-town-country diversity and presents such a tropics so beautiful yet real.

But both J and I felt that there was something missing in the film. Maybe it was just too neat. The urban/rural dialetic running parallel with the corruption/innocence play - and the small town, in between, the stage for the individual's dilemma and struggle between the 2. Nature, beautiful and bountiful, does not harm. Like a parent or an elder sibling, it harbours, soothes and reassures - whether on a hot, humid night, or a quiet, easy afternoon's bicycle ride. Individuals who are set loose upon the world (like Tung's uncle, a sailor who is literally adrift and who is fatherless like Tung) alone, inevitably feel the need to protect themselves. They use guns, snooker cues, exploitative boyfriends. None of these satisfy. Instead, they bring about further estrangement from nature, love, family.

Like the Malaysian landscape Ho Yuhang captures, this neatness is part of the film's simple, unpretentious beauty. But for me, it becomes a weakness when the director decides, at the end of the film, to actually spell it out in 3 short closing sequences.

If not the landscape and the Cantonese dialogue, you would have thought this a Taiwanese indie. For me, this too was is part of the film's uncomfortable neatness of mood and form. If I walked into the cinema without any expectations, I also walked out with no surprises (except maybe a small pleasant one about our neighbour's film talents).

Still, this film is worth watching. You can watch the trailer here. And if you have no special feelings for cinema operators, you may want to just watch the film on VCD instead. It's a lot cheaper at $11.90, as J and I discovered tonight, too late, at your ubiquitous Poh Kim video shop!
film