This morning I was strangely awake despite the short sleep and perhaps because it was a dreamless sleep. On the train to work, I read in the Mar/Apr issue of Art Asia Pacific an article about Gordon Tsai Tsung Ming and his dream community or 夢想社區.

A farmer's son in Hsichih (Taipei County), a place previously devastated by floods, Gordon Tsai had a dream about a community completely energised by the arts - not necessarily the kind in museums, but of the street and parades. 5 years ago he also created a dream parade, and with his own money (supposedly US$500k per year), creates residencies for foreign and Taiwanese artists, and organises workshops and activities for the community.

According to the article, he's a businessman (real estate?) and

"anyone interested in one of his apartments must sign a contract agreeing to 3 conditions: a prospectivetenant must go to a worldwide arts festival...and return with photographs documenting his or her participation; the tenant needs to organise a group of at least 10 people under a unified theme to martch in the Dream Community parade; and...should the tenant wish to resell, any increase over 3% of the original price goes back into the community."

Wow. This dreamy man clearly walks the talk. He drivesa scooter, and rents his home. "I want to change society through the arts and destroy values of desire and luxury. Rich people are a bad influence on society, teaching others to be big consumers and destroy the environment."

If you are going to be anywhere near Taipei, here's a review of the Tree Cafe at the Dream Community with some travel instructions. The website may have more travel details.

J and I, we are definitely living in no Gordon-Tsaish dream community. (photo above by J)

There're no street parades by generous, maverick businessman here. Instead, 2 nights ago, we had a traditional puppet Hokkien opera troupe perform by the taoist temple nearby. There were tables of men sitting at the temple, chatting, staring into space. They were definitely not watching the action of the 2 tiny puppets at a distance. They had no audience - just us and the occasional kid. The middle-aged women behind the stage, however, didn't seem to care. They sang, improvised the Hokkien script and seemed to enjoy each other's company. The row of musicians behind them - white-haired men - were in a different world. They played their instruments, with one ear plugged into their handphone. 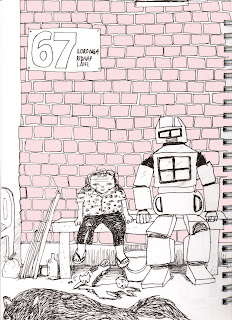 A few streets away, between 2 blocks of flats with shops on the ground floor, was a nightly/daily gathering of middle-aged men and women for beer and groundnuts. Not far away from them will always be 2 cats and a giant black wolf-like dog. They belong to a tiny old woman who lives with her trolley and chairs by one of the blocks. Above her are 80 square metre apartments of working class Singaporeans, similarly asleep. No rich person here to be a bad influence on society!
art-design HDB theatre

Unknown said…
add to that the security camera in the bus and it sounds quite distopian don't you think??!!

Anonymous said…
stumbled upon your blog.
my tw friend stayed in hsichih and being at that neighborhood, you could sense the cultural and arts atmosphere. well, this tw friend of mine play saxophone and too participated in their community parade.
near to the tree cafe, there's a chinese restaurant serving jiang nan cuisine. not to be missed.
7:36 pm