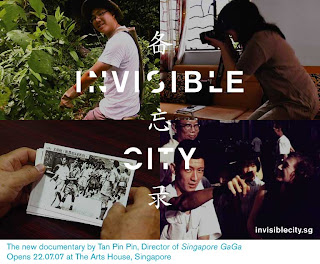 the official eflyer with logotype by Mindwasabi. amps made our own unofficial guerilla "world cities" versions below. heh.

Like writing a book. Ensuring a long line of descendents. Amassing an art or any kind of collection. Writing a book (or a blog!). Making a film. 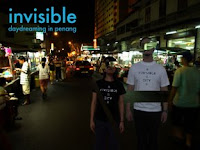 This evening, ampulets went to watch a special "bloggers" preview of Tan Pin Pin's new video Invisible City. A few months ago, we saw an earlier cut and lucky J even got to tag along at a few of the shoots - but there would always be that excitement with watching a film, starting with the opening credits - a visual and aural staccato - that is its own. 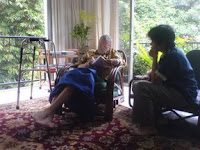 I shan't say too much about the film itself. No doubt there'll be many reviews etc (and the film is rich and textured enough to afford long ruminations and reflections). Except this that if you have seen Singapore Gaga, then this is a quieter film, with a premise and references that are less "popular" and familiar (hey, how more popular can you get than Victor Khoo/Charlee and the $1 tissue-paper lady!). Of course, this being Singapore, someone at post-screening dialogues of films set in Singapore always reference the "political" (aiyo, like boiled peas at the university cafeteria!). But for me at least, what I always liked and admired about Tan Pin Pin's videos is the personal. I guess in poetry, it's cadence. An intimacy hidden in the inflections of a voice - silent - but communicative. And it is difficult not to hear the filmmaker's voice (this time, literally, in interviews), curious, open, human.

In this way, what holds the film together is not some abstract notion of memory and cities or Singapore and politics or - but the very existence of stories and lives lived (including Mr Han's here)- even if only barely glimpsed. In fact, as if recognising that a lifetime cannot be summarised and archived - however important and valiant the efforts to etch and record and excavate and (re)tell and document and preserve - the very brevity of each encounter in the film suffices. 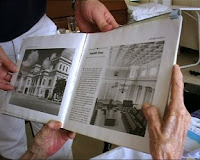 The very briefest of these was Marjorie Dogget. For me, most lovingly shot and moving. She is seen only in her pyjamas, lying on her bed - her face is carved by time, her eyes large marbles rimmed red. Yet her voice is slight, almost shy and careful, girly - betrayed only by a breathlessness. Her tiny hands can barely hold up an old book of published photographs she had taken in 50s Singapore. To the question if she regretted staying on in Singapore all these years, her answer almost disappears into the air- just as her small body threatens to break apart. Perhaps, she says, only now, when she can no longer see or walk that she regrets. Singapore is not a place for growing old, she concedes simply.

Aiyah, I have already said too much.

Below are some online articles/reviews of the film so far at:
> Yawning Bread
> Yahoo News
> A Nutshell Review

society above self said…
This comment has been removed by the author.
6:40 am

society above self said…
Nice blog! That one Q&A with Marjorie Doggett was the most haunting for me. The possibility of regretting at a point of no return was rather chilling to contemplate.
7:02 am

ampulets said…
Thanks! That's really what regret means - no return. I guess, visually, Marjorie Doggett's physical fragility and vulnerability makes it all the more "chilling" and sad. Perhaps it's a parallel to the buildings that are also physically disintegrating or gone.
11:55 am

Sivasothi said…
I wrote to Majorie a letter as a kid, about animal welfare and she replied with great graciousness and generosity. Didn't know then that she was a photographer of distinction.

I had a shock when I saw her in the film, and heard her say what were chilling words to me.

I wonder if we'll be able to change that in our lifetime.
2:39 pm