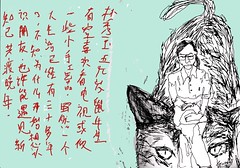 It was almost exactly 2 years ago that J and I were looking at the work of independent researcher Koh Nguang How Errata at p-10. And I'm going to say this: How time flies!

Perhaps because lots of other unexpected/unplanned things happened in the 2 years - J and I got married, J quit his job to work on his ampulets design company, and Ma J passed away a year after her stroke - reading the very short "to do" list we had set out then, I realised that other than that short story, the posters, video and T-shirts remain ideas.

Two evenings ago, the Singapore Art Museum opened its new small-ish show From Words to Pictures: Art During the Emergency, which builds on the work started by Koh for Errata. Over the years, there's been a steady effort by various curators and researchers/historians to document and re-assert the art of this period, shaped by 2 key organisations - the Singapore Art Society and the Equator Art Society. It was an exciting period, partly because art not only collided with the historically significant developments of that time, art and artists participated in its movement and dialogues - socially, politically and aesthetically. There was no clear delineation between society, politics and art; or at least there was a desire to see each relate to the other. As such, there was an urgency in the works, a consciousness of the art's immediacy for society, and an understanding of the need for the collective as well as the individual.

Even though the Guest of Honour and many of the artists present were not folks of media currency, this was one of the liveliest SAM exhibition openings I've been to in a long while. Lively because there was a real sense of discovery and of connections being made - among the audience, and between the work, artist and audience. Artists posed next to their works, gathered friends, and visitors placed their faces closed to examine the works.

The the Guest of Honour - former Minister of State for Culture Lee Khoon Choy - didn't appear to have spoken from a prepared speech highlighting the "vibrancy" and achievements of Singapore's arts scene. He described his experience and perspective of the art of that time, its considerations and inspirations. He did not have to tout an official line or represent anyone. He represented himself. And I believe the audience understood his words as such - nothing more, or less. Mr Lee ended his speech by describing his vision then (and now) that if every HDB flat in Singapore had 1 painting by a Singaporean artist, the impact it would have on art in Singapore.

If this small island was short-sighted or ill-advised on 1 thing then - and even now - by taking Maslow's hierarchy too simplistically, it is that culture can wait.

============
From Words to Pictures: Art During the Emergency will be at the Singapore Art Museum until 31 October. Check out the exhibition publication ($10) which reproduces the essays written by various artists of the Equator Art Society. To get to the Art Museum, take the train to City Hall station. From City Hall, walk past CHJIMES and Carlton Hotel. SAM is the old St. Joseph Institution building along Bras Basah Rd.
art-design museum singapore

I used to work in a local art gallery that carries Chua Mia Tee's works alongside several other local artists like Tay Bak Koi, Koh Sia Yong etc. I can't tell you how much I always enjoy reading your blog updates as it not only reminds me of the work I used to do, but also helps me keep in touch with the art that's happening in Singapore. (I am now a full-time mum living in the UK.) And your entries are always insightful and personal yet interesting! ;)

Actually I''m a faithful reader of your blog since its early days. Just wanna say - Stand by your art and keep up the good work amps!