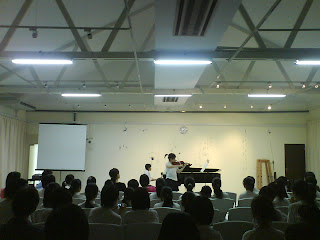 When you've been buried in your work for a while, take a step back.

It's simple enough. Everyone knows.

Step1 back
This afternoon, I took some time off work to be at the School of the Arts, Singapore (SOTA) and caught 15mins of a short recital session by a few of their young music students. Watching the 13 and 14 year olds take their art seriously and interacting with teachers who, I think, are not only developing their students' skills, but in performing alongside their students, demonstrating the values of the arts - I came away hopeful about this island.

The value of an arts education is not a career in the "creative industries" or even being a "well-rounded" individual. It's a whole bunch of other stuff - discipline and persistence, confidence, openness to new ideas and (contrary to all the stereotypes of self-centred artists), respecting others, whether the artist for your audience, or the audience for the artist. 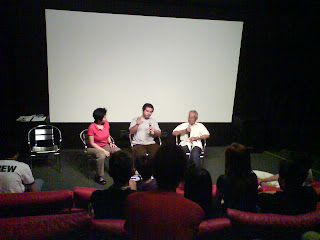 Step 2 Back
The SIFF this year did not yield any real gems for J and I. But last Sunday, after watching this film, its simple lyricism was refreshing - as was a short chat we had with a friend on the grounds of "old school" about films and what seems, to me, possibilities.

When you've been buried in your work for a while, take a step back. Even if that step brings you to places where it's, arguably, still about your work. It's simple enough. Everyone knows. The need to see alternatives, sense possibilities, realise that there's still space - around, ahead - behind.
art-design film singapore