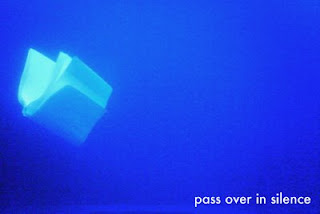 ...that's a Singlish and somewhat reductive version of the Singapore Biennale's theme this year. Yet the ability to wonder is not something we should scoff at - it suggests, at the minimum, curiosity and if it implies a level of naivete, it's because our cynicism is not far away as a counterpoint. Nor should we underrate the almost unique ability of art - among other exercises of inquiry, craft and expression - to cause its viewer to stop, be amazed, think and question.

But in today's world of expensive, Olympic-scale entertainment, is art no more than another spectacle? Because what indeed are we wondering at, or what are we to wonder about? And does it simply stop there? Is wonder as a purely visceral response to art enough? 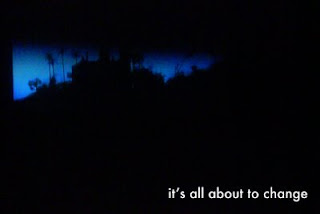 J and I spent Thursday evening wandering the halls and rooms of the City Hall building. Some of the best pieces at the City Hall site were multimedia or video works. Clare Langan's magical and epic-like scenes of domestic interiors or small town landscapes covered in snow or threatened by suggestions of an impending storm are captivating. There is a segment of close-ups of what looked like the night sea - its ominous waves, deep and dark, oil-like in a slow-motioned viscosity - which, to me, was all of nature's horror, power and beauty. There is Charly Nijensophn's quiet video "The Wreck of Men" placed figures, monumental in their stance, but wasted as they stand on precarious pedestals in stretches of sea and water and sky, a beautiful, enduring and ultimately indifferent landscape. We also really enjoyed Yuan Goang-Ming's video "Disappearing Landscape - Passing" and Thai filmmaker Apichatatpong's elegiac "Morakot". 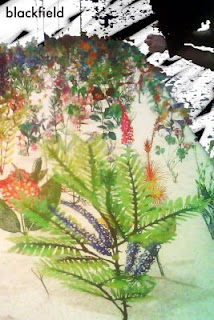 And while there were few overt political or specific references to national or global events, these works are both timeless yet entirely in and of our times - the massive earthquakes, tsunamis, floods and storms that have accompanied our rapid urbanisation and consumption, and the continuing man-made destruction and chaos of fallen governments, armed rebellions and wars. 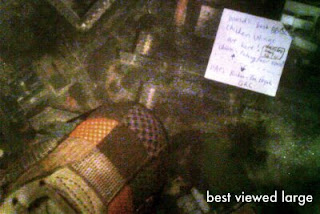 Amidst these large canvases, J and I found a moment of escape in the Surrender Chamber of the City Hall where we saw under our feet the google earth map of the island the Japanese surrendered to the Allied Forces at the end of World War II. The oil refinery offshore islands were all geometric patterns, stark in their graphic order. The main island itself was all green and concrete grey. It was harder than we thought finding Toa Payoh. We located it in relation to the MacRitchie and Pierce nature reserves, followed by the bright blue of the public swimming pools. With a piece of paper, ampulets claimed this spot, marking the politically-divided constituencies and the island's best BBQ chicken wings.

Notes to Images above:

1. Ki-Bong Rhee's "Bachelor - The Dual Body", a beautiful installation of a book,
Wittgenstein's Tractatus Logico Philosophicus that floats and flaps its pages in a tank.
2. Clare Langan's "Metamorphosis", a video work.
3.Zadok Ben-David's "Blackfield", an installation of stainless steel miniature plants.
4. Wit Pimkanchanapong's "Singapore", a google earth view of Singapore laid out in the Surrender Chamber at City Hall for you to walk over and "footnote".
art-design singapore