The description of Tuas on streetdirectory.com begins "Tuas is Singapore's version of Chernobyl."

Comparing Tuas to Chernobyl is way too flippant, but to most of us islanders who don't work in a shipyard or any of the heavy, manufacturing or chemical industries, Tuas will seem somewhat surreal.

There is really no distinctive architecture - just these monotone blocks, some of them windowless or clad in metal. There are no high rise buildings. Even the trees are low and overwhelmed by the concrete and steel. The streets are wide. Or perhaps they feel especially wide because the traffic is sparse, save for that roaring truck. There aren't many people hanging or walking about as you drive by. But although the place seems deserted, there is the knowledge that inside those concrete and metal blocks, there is almost non-stop activity. Man operating machines operating the economy operating man.

Why were we in Tuas? To visit a bookbinder for one of J's projects.

It was fifteen minutes to one o'clock when we arrived.

A dog stood by the wide entrance. A group of men were resting by the side. The place was dark - and lazy. Of course, it was their lunch break. We were directed to the back of the cavernous space that was filled with pellets of print and quiet machines which resembled abandoned amusement park train rides.

The office was a florescent glow behind a clear curtain of thick plastic. We peeped. On the walls hung portraits of leaders, politicians, gods and celebrities. There was (I think) Osama, Ganesh, Obama, Thaksin, Abdullah Badawi, Mahmoud Ahmadinejad, the Old Man himself, Ella from Taiwanese girl-band S.H.E., the Harvard-educated Japanese princess...

M finally emerged. After a ten-minute discussion between J and M in the office, we turned around and saw, to our amazement, the entire factory floor transformed! The factory floor was lit, the machines grew noisy one-by-one, and a group of some twenty men and women seemed to have appeared from nowhere and were now industriously carting books, folding covers, pushing buttons and supervising machines. M smiled at our undisguised curiosity. 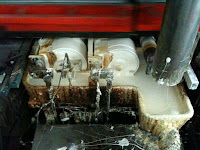 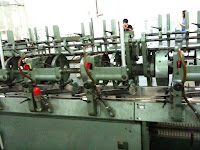 Our tour, however, was interrupted before it really started by our introduction to Mr S, the boss-man, master bookmaker and lunchtime portrait artist.

"Good good, you must see all the machines, then you designers can understand how it works!"

And so began a personal tour of Mr S's $4 million-worth of secondhand German binding machines ("except this machine, this one is from China. The Chinese they copy everything, exactly the same as the German one."). They fold, glue, stitch, cut, separate, make hardback and cloth covers, apply the little ribboned ends to the spines... all the mechanised hands, wheels, presses and rollers.

"Nowadays, I see the design, aiyah, immediately I can tell: over-designed. They design, don't think about how it can be made. I tell them, this cannot be bound this way. Sometimes simplicity is better." Mr S offered his design advice to J. 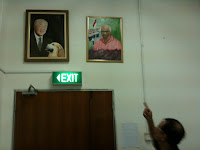 "One day I saw this exit sign, then I hang these portraits here because they are, haha, *you know*..."


We ended the tour almost an hour later, with Mr S inviting J to organise a study visit for designers to his factory.

"I am preparing some slides about binding. You can go and organise a small group to come lah. But make it informal, we can walk around then discuss. Good that you designers come and see. Make our job easier also!" He laughs.

At two thirty, we walked back out into Tuas' empty streets, thinking about the books that we could possibly make with Mr S's German (and sometimes Chinese) machines.
art-design art+design books

ampulets said…
Cool, we'll try to get things together for maybe December.
1:48 pm