8 Books for August the 9th 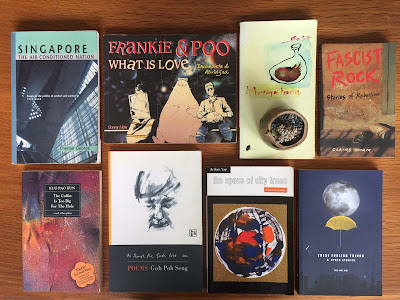 If watching the National Day Parade or listening to those National Day songs is "too much" for that skeptical you, but you know it doesn't make you any less of a citizen, I recommend any of these books by Singapore writers instead to spend your August with (in order of their appearance on the photo, from left to right, top to bottom). They are mostly written pre-2000... not because nothing good has been written since, but for me, these titles have stood the test of time.

Singapore the Air-Conditioned Nation: Essays on the politics of comfort and control 1990-2000, Cherian George (2000)
This is the first collection of essays on Singapore society/culture/politics that I've really enjoyed, for its incisiveness and insight, and the quality of its writing. I found it also an unabashedly "patriotic" book, a voice that cared about the society he lived in.

Frankie and Poo: What is Love, Incomplete & Abridged, Sonny Liew (1996)
Pre-Charlie Chan fame, Sonny Liew drew daily strips for The New Paper (or was it ST?) back when newspapers still had comic strips. I looked forward to the Calvin-and-Hobbes inspired comic strip,  the questions and wry humour about life in Singapore were easy to relate to. I think you can still find this book in the library.  It's got all the casual political critique you will find in Charlie Chan (and the book was published by SPH's Times!), but 1996 belonged to a different time... Then, the lo-fi feel of the drawings wouldn't embarrass anyone too. Below is an image taken from a random page. 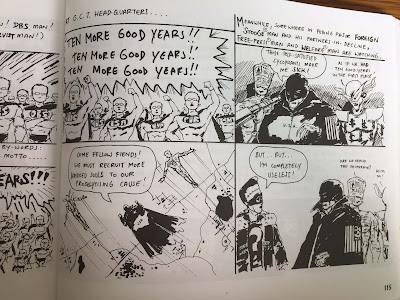 A History of Amnesia, Alfian Sa'at (2001) but actually the poetry collection I really want to recommend is One Fierce Hour (1998) but I think I loaned that book to someone years ago and it never came back. I remember reading it, a year or so after I came back to Singapore from the UK, and feeling excited about the quality of writing. Sure there was lots of angst from the then 21 year-old poet, and there will continue to be that angst in our literature in this politically and sometimes even socially oppressive society, but I have never before heard a voice both "fierce" and lyrical.

Fascist Rock, Claire Tham (1990)
Another angry-young-person book. I read this in JC1, was jealous of the writer. But after years of resisting the Singapore fiction that was Catherine Lim, Claire Tham's short stories were urban, current and energetic. And it had the words "Fascist" and "Rock" in it. Win liao. It will seem dated today. Pre-social media, the means and meaning of rebellion were perhaps more subtle and considered.

The Coffin is Too Big for the Hole...and other plays, Kuo Pao Kun (1990)
These plays by Singapore's foremost playwright will survive re-stagings. I think every generation of audience - and not only in Singapore - will be able to empathise with the characters' encounters with bureaucracy, authority, loss and desire for home.

As Though the Gods Love Us, Goh Poh Seng (2000) and If We Dream Too Long, Goh (1972)
The former is a poetry collection and the latter is Goh Poh Seng's first novel (I have a photocopied version somewhere in a cupboard but you can probably find it in the library). Goh's biography Tall Tales of a Young Westernised Oriental Gentleman  is a great read. I don't know why If we dream left such an impression on me. The writing, particularly its dialogue, was a little stilted. Its premise of an idealistic young man battling his pragmatic environment is familiar with all coming-of-age stories.  If I have to use an adjective to describe what I've read, I think it'll be "honest".  Read it. Also Goh's poems. Maybe you'll discover his writing for yourself.

The Space of City Trees, Arthur Yap - this is an old selection, his collected poems are also now available under NUS Press.

My favourite Singapore poet to read aloud - or even if you read his poems silently to yourself, you will be drawn not only into his paintings, but the cadence of his brush strokes, the gentleness with which he seems to view the world. His poems are like an oasis whenever you feel our tropical island is too crude, the air too dense, the people too unkind.

These Foolish Things & Other Stories, Yeo Wei Wei (2015)
And so we enter this decade! I may be biased because WW is a very dear friend. But these stories are damn well-written. They are measured, humorous, witty and strong. They also remind me that our arts and lives in Singapore are not only defined by politics, but they are rich for the relationships, feelings and thoughts that we have. And it is for this that our stories and lives are free.
books singapore