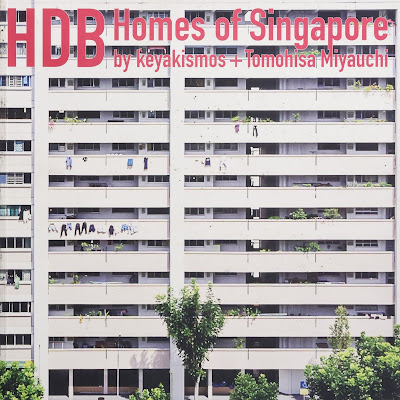 My neighbour's flat has been empty for over a year now.

The Teochew great grandmother who lived in the flat has been living there since day 1 of the apartment block more than 40 years ago. She brought up her sons and the grandchildren of her eldest son in there. Every other day J and I were bound to bump into the son who lived with her or some other child of hers dropping by to check in on her.

In the last years of her life she was not very mobile, but her spirits were positive and she kept her door slightly ajar, so we knew she was okay or she would occasionally peep and say hello when she heard us.

Two years ago she passed away from pneumonia. She was past 90. It has been a good life.

Her flat is a time capsule. The green terrazo floors. The wooden bedroom doors that bore coats and coats of paint. The wall with faded photographs and the display cabinets that still had children's toys from the 80s. Her children did not put the flat on the market in the first year of her passing because they wanted to have regular family re-unions there. A son said to us, the house held so many happy memories, they didn't feel the rush to let it go - they wanted to keep it for their mother.

They have been great neighbours. Considerate, quiet, friendly. I think we were too. Now that the flat has been empty for the past year, I have gotten used to the quiet and to clearing out the pamphlets slotted by their front door.

J would sometimes say it's sad how quiet it has gotten. And that it is sad no one wanted to buy the flat. He saw it, I think, as a reflection of how society, the market, would value our flat too - and he questioned if we would be in trouble when we were old and the lease of this flat would be in its final decade or two. These things don't matter to me.

I hear from the housing agent that there is finally someone who made an offer on the old lady's flat. I dread the months of renovations that would follow. I dread the possibility of a neighbour who wouldn't appreciate the plants. I dread a neighbour with possibly bad taste and worse hygiene.

But this is HDB living. And also what gives HDB living a sense of community, this ability to share and respect common living spaces.

Below is a blog post I wrote in 2017 but did not click "publish". It was written when the tome on "HDB Homes of Singapore" was published by Tamae and Eitaro aka Keyakismos. The book included photographs of our flat taken many years ago (friends will recognise it). The post below was also written as we considered moving to a larger flat and one with a longer lease in Toa Payoh. This was so that J would have a more comfortable studio. The very short house hunt then was also my way of trying to get J to understand that there were always options, but deep inside, I don't think either of us then wanted to move. I still don't want to now.

If you're the sort who cannot resist trying to peep into someone's  home as you walk along the corridor (yes, you, you're the reason why folks use curtains, cardboard, coloured acrylic, perforated steel sheets or simply leave their windows shut), Tamae and Eitaro's book on HDB homes is for you.

It's the voyeur's dream come true.

The photographs of every flat's interior can be looked at like the portrait of its occupants. Yet there's also a sense that each flat is its own independent person, its own creature.

Tamae and Eitaro had photographed our flat too for the book. That was at least 4 years ago. At the time of their visit, we had just given the flat a new coat of white paint after living in it for 10 years, installed another wall of book shelves in the living room, and touched up all the bits that had been worn down. It looked extremely neat. In the photographs, the flat glowed like a new born baby.

Looking around me, how our flat has changed! Our books have outgrown the shelves, again. They now sit on our dining, work and coffee tables, and spill out of the shelves.  The shelves have acquired new knick knacks of found, bought, gifted and home-made objects. Our couch has shrunk to a 2-seater (so a small tea cabinet can help with the hosting of books).  But the biggest difference would be the sheer number of leafy plants, succulents and cacti that are now in and outside the house after J decided to green his fingers.

The flat does have its own life.

When we return from an overseas trip and open the door, we can feel its sigh of relief - a small, damp sigh. When the wind howls through its 15th-floor windows, its laundry shivers and its doors occasionally shudder. Its tiles wrinkle, bear the marks of age and labour. It is large - it can be our nest, the lizard's country, the ants' planet.

Recently we have been thinking of moving.

The flat is over 40 years old, which is almost halfway through its 99-year lease - and not many buildings get close to being 99 years old. It sounds stupid, but we were worried if we didn't move now, we'll be forced to move in our 60s when packing, shopping for new furniture and arguing with contractors would be way too tedious. And all because some silly Minister made a callous comment about the termination of HDB leases, which ate into J's insecurities.

So we decided to check out some flats whose owners have decided to give them up. Like we would ours. Oh betrayal!

We've seen only 2 flats to date. And boy was the experience weird for me. J had his round of house hunting 20 or so years ago just before his first marriage.

It was odd walking into a stranger's home, with the intention of invading and taking it over. Not the home, the flat. And in the short, awkward tour filled with whispers and tenuous glances, I can feel the flat's nakedness. It was laid out to be judged. The windows are too small. That wall will heat up in the afternoon sun. Can this wall be demolished? How many years has the owner lived in this flat? The marble floor, oh it is still in very good shape. And that most embarrassing of questions - why are you no longer wanted, flat?

Both times the experience was a sad one.

She was alone - maybe a single parent, and could it be the spouse had just passed? The child, she didn't look up from her books. Her sister has similar furniture int he other room. I wonder who is the younger one? The one whose room has more pink. They've not kept the toilet, kitchen or ceiling well. Perhaps she worked to support this family and didn't have the time to clean and fuss; or was too tired at the end of each day. Why didn't the daughters help? She was not watching TV with her mom. Teenagers are always difficult.

They looked like retirees. Their son is overseas. Is there only one child? Half the windows were closed. Don't they like more light in the house? There was a smell of fried fish. Fried fish can be clingy. The room with the single bed is neatly packed up. No one probably sleeps in it anymore. I can't see much of the other bed room - it is dark. They didn't want to make any eye contact with us. The old man says the house is worth $_____. It is a good flat he finally says, on a good floor. His voice is proud. I don't think he wants us to have the house. It is dark on a sunny day.

We reached home. No loot from the reece, no kill from the hunt. We quickly opened all our windows. Ah, it was good to breathe!

F-k it!  Who cares about the minister and his unintended fear-mongering. Us and you, buddy, flat, home, refuge, den - we are gonna try to grow old together for as long as we can.

rebecca said…
Lovely post, lovely thoughts. I enjoyed this HDB book too. I've always been a voyeur and enjoy looking into people's homes (yes i'm the reason why people close their curtains hahaha) so I'm extremely glad someone took the trouble to create this book. I can't get enough of it!

And thank you thank you for writing about your love for J. You have taught me a lot about how to love another person. You did great and you're still doing great. So thank you!
7:18 pm

ampulets said…
Fellow voyeur,J was also always comforted by your sharing about your struggles. 大家一起加油。
7:45 pm