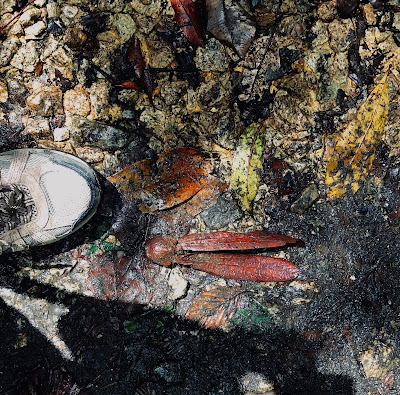 Today started like any other day when we would go to MacRitchie - lazily, then a sudden rush to get out of the house. Quick! Before the sun rises to its height!


I had decided last night to go for a walk and do something good for the body. And not just a leisurely walk, but a little work out. So the route would be our usual trail running route at MacRitchie. Not crazy long, but a decent 7km up and down some gravelly slopes.

Nothing had changed on the trail.  I know this trail so well. Yet of course nature is never still. It is constantly growing, dying, breaking, falling.

After the rain last night, the trail was muddy. But as a result, the air was also cool. And there would be stretches where the wind rustling through the leaves made such music. Music and sunlight dancing on the trail. A giant millipede made its way across a path littered with giant winged seeds of the dipterocarp. I had never noticed these seeds on the trail before, nor encountered a giant millipede.

It was a busy morning. Perhaps for fear of the virus, folks are choosing to spend time in the outdoors instead. We had families, runners, retirees, tourists and young student types. I was almost never alone on the trail. We sidestepped each other. We overtook the other. I sometimes stepped aside for a runner. He or she sometimes said thank you. And then I marched on.

On a trail, you only have two choices. Stop, turn around and go back. Or push ahead until you reach the end. Either way, you can't just stop in the middle and hope that it ends there. It doesn't. So march on.

The return route always feels faster on this trail. There are more downward slopes. But maybe that's the case for all return routes. It's something to do with memory. Because you are retracing your steps,  the mind spends less energy registering new sights or experiences. So it cuts itself some slack, blanks out at moments, and time therefore appears to have passed more quickly.

I slowed down my steps towards the latter half of the return route. I wanted to slow time down. But it was also to give my body some rest while giving more attention to looking at this trail from the other direction. I thought to myself that this walk had been very enjoyable, alone or otherwise. And then I reached the end. 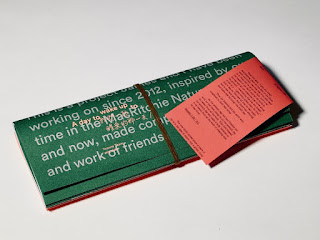