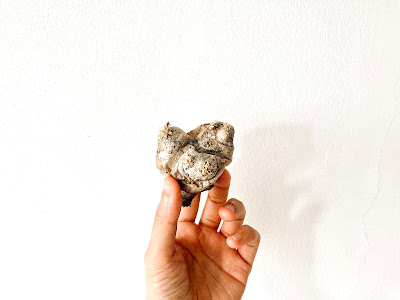 If you visit me and see dried arrangements of flowers or random leaves and twigs, chances are they were preserved by J. In the last two years, with J gone and then with the time spent working from home during COVID, I discovered two things:

One, there really was a whole lot of dried bits of plant all over the house! I didn't notice them the same way before. Even though my housekeeping task was wiping the surfaces of the shelves and cabinets, I saw but never gave much attention to these little creations and actions of his - a leaf tucked between two books, an arrangement of dried leaves and flowers in a small bottle, an entire branch held to a magazine or a shelf by some clever clip...

Two, these bits and bobs of dried plant reflect J's love for his plants. If you care for something, you care for all of it - even its remains, what it sheds...you remain somewhat fascinated by it. Because I now spend more time looking after the plants, I too have started to collect their fallen leaves and bodies - their shades of brown and grey, the patterns that are preserved, the new forms they acquire. 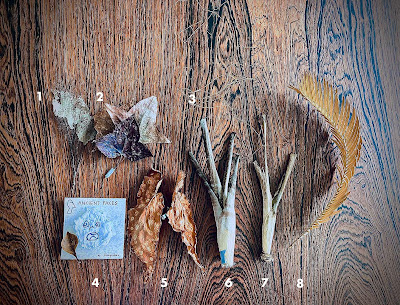 Today on the second day of the lunar new year, I sat at the dining table and observed that the large bell jar  looked little mouldy. The bell jar used to contain a fussy begonia, but after it died, I used the bell jar to keep dried leaves - some from J's collection and some newly acquired.

I laid out the content of this bell jar. They are:

1) Random dried leaf with really intricate skeletal veins still showing. I don't remember who had collected this or when. But I know why. This delicate and broken leaf had something incredibly strong about its structure.

2) 3 Leaves that a friend HH gave me. She had picked it off a tree in an old house in Taichung that was now an inn. J and I stayed in it many years ago when we took a holiday in Taichung. This tree grew in the middle of the house, within an air well. The staircase snaked around it. It was a beautiful house. The friend discovered in the inn's guest book a sketch we did. It was her first time in that part of Taiwan, and she loved it. She wrote to tell me how much she enjoyed Taiwan and how she remembered J telling her about our holidays there. She enclosed the leaves in her letter. I texted her that J and I had in fact collected and pressed a leaf from that same tree in our note book from that trip.

3) These fine, hair-like tendrils of the climbing onion. The plant flourished after J did. But one time I over-watered the plant and it started to weaken. By then, it had sprouted really extensive wisps. It was such a pity. I couldn't bear to throw away the faded golden wisps.

4) "Ancient Faces" by Californian artist-designer duo Kozyndan. J and I both really liked their work, having discovered them more than 10 years ago in the Giant Robot magazines. But I don't know why we never did think about collecting their prints or work. Over COVID, Kozyndan decided to relocate to Japan and were clearing out their online store. I bought this ceramic brooch. It was so silly it made me laugh. It felt right that it should sit with these dried leaves, among other fossils. In this photo, there is also a tiny spikey  leaf.

5) 2 dried leaves of the Begonia Mucolata. This begonia has beautiful leaves shaped like angel wings. They are dark green with a fringe of red and silvery polka dots. J kept this Begonia in his studio. All begonias, I think, are fussy. It died but J kept several of these leaves around the house. I threw them away, save for these 2 almost perfect specimen.

6) Black Zombie bromeliad. This was J's favourite bromeliad. Its leaves were black with uneven silver stripes, and small sharp teeth. The black zombie has a narrow vase. Before it died, it threw out a pup. Most bromelia do not survive their children. Its pup is now fully grown at about 8 inches tall.

7) Pink Lady bromeliad. This bromeliad is a slim, silvery plant with hints of pink if grown under strong sun. This pot of Pink Lady continually throws out pups. I kept the original plant dried out. Today in its pot there are at least 3 pink ladies of different generations.

8) Sago Palm. J's first cycad was a small Sago Palm he bought from Far East Flora. It died after a year. The leaves of the Sago Palm are often displayed above the doors of Catholic homes on Palm Sunday. The leaves remain tough and extremely sharp even after they are dried.

When I move to the new flat, these items will be in the bell jar still. I am thinking where I should display this assortment. Who knows? I will move into the new flat and decide. Feel the space. And maybe after I move in, I may decide not to keep them in the bell jar anymore, or not at all. Spring cleaning is one of my special powers after all!