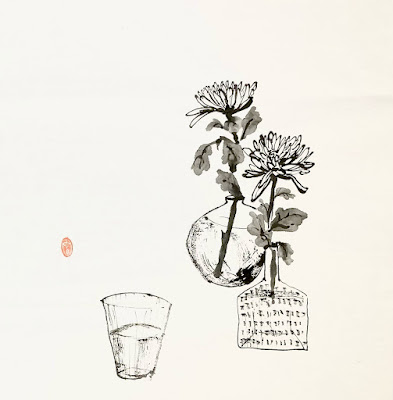 “If you had known when you started you may not eventually get to know.” 😬This drawing started as a practice for drawing chrysanthemums. I wanted to draw two stalks of chrysanthemums, one slightly different from the other. When I finished, at the spur of the moment I decided to draw a glass half full (or half empty haha) as a companion for the flowers. It felt right. It felt like the flowers needed the glass.But after the glass entered their world, the flowers began to look instead like they were floating in mid-air, their lack of rootedness accentuated by the weight of the glass at the bottom of the drawing. Hmm, was I wrong?I looked at this picture all evening and returned to it at night. Then I realized! It wasn’t that that flowers needed the glass as their companion. The flowers needed nothing but each other. The glass, however, needed the flowers. I drew 2 glass bottles around the stalks of the flowers, a mottled square-bottomed one and a round short-necked one. Two glass bottles that happened to hold two chrysanthemums, for the sake of the glass that is half full (or half empty).