See you on the other side, babe 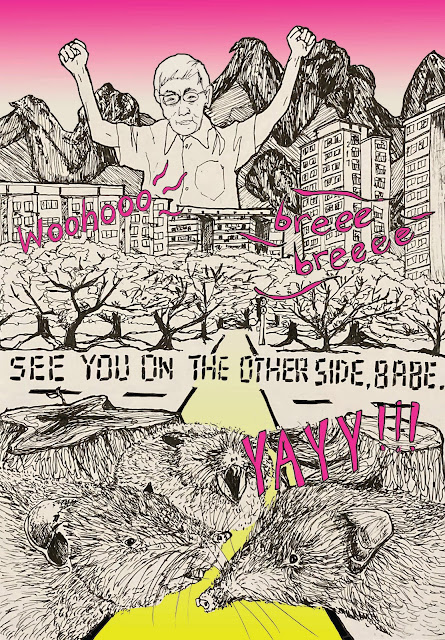 When I visited Seabreeze Books with a writer friend WW some months ago to deliver copies of Furrie and Shortie, I met with one of the owners. The result of our chat was that he invited both of us to contribute pieces to a book they were publishing "My City My Streets".
It is a collection of 26 essays in Chinese (and photographs) about streets in Singapore that hold special significance, personal or otherwise. The book will be released in August. Watch for it!
My piece is about Toa Payoh Lorong 8. Of course. It's ampulets's original and not-so-secret base!
I also made an illustration "See you on the other side, babe" to go with the text, but they decided not to include it in the book in the end. Too bad, because this illustration is classic ampulets!!! Grassroots, filled with love, and just a little mad. If enough friends ask, I may make a batch of tees with it.....
Anyway. Here's the piece, which I wrote in English:
Toa Payoh Lorong 8
Cutting across Toa Payoh Lorong 8 is a narrow two-way road that also serves as a border
between two electoral wards. On one side of the road is a sliver of Potong Pasir. Awkwardly
sandwiched between Lorong 8 and Braddell Road, from 1984 to 2011, it was part of the ward of
opposition politician Chiam See Tong. On the other side of the road lies the Bishan-Toa Payoh
ward. The block of flats I lived in was right along the border, on the side of the winning
majority.
For many years, the differences between both sides of Toa Payoh Lorong 8 felt stark. The
Potong Pasir side boasted void decks of concrete; abandoned chairs and sofas that quickly
became part of public furniture; spontaneous private gardens; and a hawker centre that had the
world’s best BBQ chicken wings. The Bishan-Toa Payoh side had tiled void decks; hardy
uniformed steel benches; stunted fruit trees planted by seemingly important people; and a
jogging path that led to various exercise stations. It was as if Lorong 8 existed to remind
residents on either side of the road what they do not have. Until 2011, each time it was
announced that Chaim See Tong had won a general election, you would hear whoops, cheers
and horns from the homes on the Potong Pasir side, joined by stray rebel voices on the Toa
Payoh-Bishan side.

Of course, politics seldom interfered in the daily lives of the residents. We freely traversed both
sides of Lorong 8 to get to our bus stops, jogging paths, and the world’s best BBQ wings. In the
same way, mice and shrew freely traversed the road, cleverly evading the traffic to make their
babies or to tease unsuspecting residents regardless of vote. As did dust – indiscriminate dust –
dust from the aging concrete, mixed, mingled and settled wherever the wind blew. But the best
thing about Lorong 8 that residents on both sides shared were the giant rain trees that lined the
road, their branches heavy with ferns, creepers and memory. In the years following 2011, several
of these giants were chopped down in the name of safety and as part of the neighbourhood’s
progressive improvement works. Just last year, I sold my flat and decided to leave Toa Payoh
Lorong 8.