cities to be seen 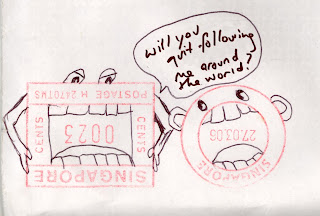 I'll be going to Venice, Basel and Kassel late tonight - for work (yes, hard as it is to believe, there's work to be done in these cities!). But it must be yet another sign of growing old, that despite the seemingly exciting destinations, us amps are dreading being apart.

Such cringey stickiness aside, we are happy to share that there's an Invisible City you can actually see (ah, loveliest of oxymorons!) without having to leave these shores -

So go get your tickets to and check out the trailer for Tan Pin Pin's latest documentary Invisible City here!


The much anticipated newest work from Tan Pin Pin Invisible City opens 19 July 2007 with free screenings at NUS followed by a commercial run at The Arts House. Tan Pin Pin, one of Singapore’s best known filmmakers, directed the critically and commercially acclaimed Singapore GaGa as well as the multi award-winning Moving House. She now turns her sharp and witty eye to the subject of memory.

Invisible City chronicles the ways which people attempt to leave a mark before they and their histories disappear. From an avid amateur film director trying to preserve his decaying trove of Singapore footage to an intrepid Japanese journalist hunting down Singaporean war veterans, Tan Pin Pin draws out doubts, regrets and the poignantly ordinary moments of these protagonists who attempt immortality. Through their footage and photos rarely seen until now, we begin to perceive faint silhouettes of a City that could have been. Quiet, elegiac and memorable, this is a singular cinematic experience not to be missed. (Taken from the film's website)

orangeclouds said…
nice illustration :) awww. i totally understand the feeling though. still, have fun!! tell us all about it when you get back.
10:21 am

ampulets said…
haha, yah, i brought a camera - maybe i'll even do some "live" reporting at night...after clearing the work emails!
10:17 pm