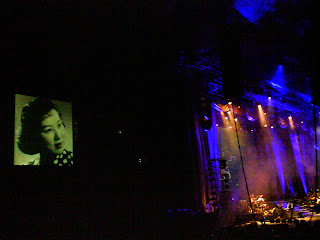 I heard one of the best explanations for why the arts and culture matter at a Cai Qin concert this weekend with Ma Y.

During an interval between singing some old torch songs from the 30/40s Shanghai and moving on to 50/60s Hong Kong, the 50 year-old Taiwanerse singer (of course, it has to be a Taiwanese to speak of culture!) asked the audience if there were days when they felt 全世界都是為年青人而活 (the whole world was living for the young). There was appreciative laughter from the 6000 strong audience, a majority of whom were folks in their middle age or older. She went on to banter about music in the 50s, but again asked the audience if they knew why it was that their children or the young despised them - I think the phrase she had used was closer to "looked down on". Her answer: because the moms and dads had forgotten and did not have their own music. She called on the audience to reclaim some of the space on the CD racks, long colonised by their children - and by extension, reclaim their 文化culture, their own 艺术 arts, their 個性 (personality?).

On our small island that very weekend, an uncle appeared in the papers' Saturday feature on folks who continue to work way past the retirement age - while another passed away. And while the Arts Council here favour youthful noises, there's something else to be said about a music that endures.
art-design personal

orangeclouds said…
I agree! I think there is some truth in what she says too.

I find Cai Qin, her life and her music (the little that I've read and heard), strangely moving. It's moving as a slice of retro pop balladry in a way that, um, Teresa Teng's isn't. Not that TT's not good or anything, just not as sad or stirring. (like TT is coffee with milk, rich and a little sweet, but CQ is dark, slightly bitter coffee)
3:22 pm

ampulets said…
oc - yah, I started out listening to CQ's cover of all the old 30/40/50s ballads, but was surprised actually by how much I liked the songs from her own albums in the 70/80s. She's really funny and her personality is big - but when she sings, the "largeness" comes across as depth rather than breadth...if you get what I mean...