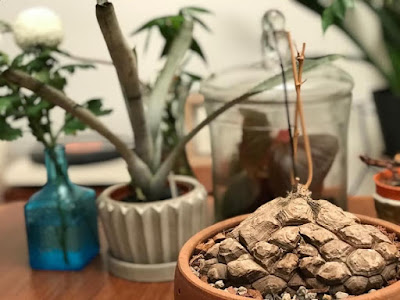 When J asked if I knew how to look after his plants, I quickly said “No”, followed by a paranoid (and rightly so) “what do you mean? Why do you ask me that? What are you thinking?” This exchange took place in that final week when he seemed strangely calm but also worryingly prone to sudden attacks. He laughed it off and said he was only curious, that I was over-reacting. I should have listened to my intuition instead.


Plants were J’s thing. I liked them, drew them and was the bookish one about them, but his was a “real world” interest - collecting and caring for, at one stage, more than 100 big and small pots of cacti and succulents, bromeliads, cycads, ferns, agaves and such in every room. He would take some out to sun by the window everyday. He rescued and propagated them. He scoured the internet to find them. He went to the corners of our tiny island to see them. He learnt their scientific names. He even subscribed to a year’s membership at the disneylandish Gardens by the Bay!

The thought of looking after his plants was at first stressful. And having some of his plants die was especially so. I was not home the whole day like J was. And getting their watering right was tricky. In my clumsiness, I even toppled a few pots. It felt that I had failed him. And their death, of course irrationally, echoed his. A couple of friends lightened this load by adopting a few of his plants, but each time I gave one away, I felt also that I was failing, or worse, betraying him.

But now, the plants and me, we are finally, I think, getting the sense of how the other works. When I get home, I start by surveying their state and opening the windows to give those indoors the fresh air they deserve. They get their once a week soak, the ferns and leafy ones twice or thrice. His beloved bromeliads are brought to sun during the weekend. To those that look like they are ailing, I give their leaves or branches a gentle pat or two each day, and a word of encouragement. Well, more of a plea actually - don’t die, please live please live, you can do it. A couple of the bromeliads now have “pups” - young offshoots. I even bought a new plant - a Stephania to replace a special one that had died - something I never imagined I would do.

This week, we had a breakthrough. A plant that had been dormant since J bought it finally showed signs of life!

The Dioscorea Mexicana was a plant J always wanted for the tortoise-shell-like pattern of its caudex. He held back because he wanted only a perfect one. One day, maybe in June last year, he came home with a pretty large specimen. It was lovely: its caudex bore a unique shape, just like a heart! But it was dormant. Two completely dried up stems stood on the caudex, like straws, nothing more. J had re-potted and tried to root it. Still it stayed dormant.

Monday evening, I came home and noticed a fresh, dark red stem sprouting! I was surprised and - no, happy or joyful would be too strong - comforted. It was as if I have received a gift, grace to my desperate pats on the caudex to coax it awake. Thank you God! And if it’s not too much to ask, perhaps this seemingly dried up heart-shaped caudex would soon be bearing the deep green heart-shaped leaves it had always promised.
MissingJ nature personal