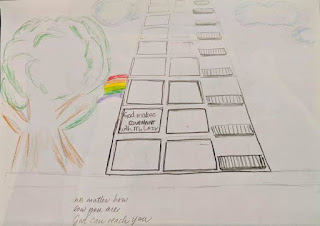 Image by a stranger, drawn for one of J's friends who was thinking of him

J shared with me that during one of his stretches of anxiety, he would suddenly feel the need to speak to someone - anyone. He would try to extend the exchange with a hawker or an unsuspecting neighbour. J had also said to a friend WW that in his depression, he often felt like he needed to be hugged. The confession stunned her. Admittedly, what he said surprised me too. It seemed a desperate act itself: to confess such desperation, such vulnerability. Even for an incredibly empathetic person, these feelings were new to him. He worried that he was turning into “one of those people who hang around at the Toa Payoh central terminal”.

I understand his fears this way -that mental illness can strip you bare, take away the inhibitions that kept one’s feelings typically clothed, made you vulnerable in ways you don’t fully understand.

Dealing with nakedness is one of our earliest lessons. As a child we learn that we shouldn’t lift up our clothes to expose our bare bodies in play. And as with our bodies, we learn that it is not ok to expose and act on our emotions in public - no public tantrums, no public meltdowns. And we learn, as we go to the playground and to school, that people are not what they seem. Our words and actions clothe our intentions, sometimes protectively, sometimes out of consideration for others, sometimes deceitfully. All this is what “normal” human society would require of its members.

Their state of nakedness is what Adam and Eve immediately realise after they eat the fruit from the tree of knowledge. Suddenly understanding what nakedness is, they must hide their bare bodies from one another. And having broken faith with their maker, they also must hide from him in their shame.

Shakespeare’s mad king, Lear, tears away his clothes in the howling wind when he comes across Edgar (disguised as a mad man) and also realises - having lost everything and feeling betrayed by all closest to him - that man is indeed a “bare, fork’d animal”. Nakedness doesn’t matter any more in his case because it is the only reality. There is no shame when you have nothing left to lose, and there is no point hiding when you know that you stand condemned, you have been found out. Despair is real.

Friends, some of you may have experienced this - the loss of someone or something that was your everything; or an accident or illness that brought you next to death. You may also have felt that you have been stripped bare, “naked”.

For me, when God allowed - in his wisdom, his sovereignty - for James to be taken away, I lost my everyday, however wrong I may have been to place everything on J. But my God wants for me to see him, his love and all he provides. If I see God more clearly even in or because of this situation, then I must count myself blessed, however “perverse” this may sound to some of you. This is the “nakedness” I somewhat feel instead: when you have very little left to lose or to hide, shame has no place; and though you have been found out, despair has no place, because you have also been found.

Put it another way. Why and how can I share openly these seemingly personal posts, as some of you are wondering. On J, his suicide, I am not ashamed nor do I despair. I regret it and miss him endlessly, but I am not ashamed of this wonderful man in his living or dying. And if my God had bothered to assure me (the hit-on-the-head kind of obvious) that J is safe in him, I must speak in hope. Plus we need to allow our fellows who suffer from mental illnesses to also not feel shame and guilt. If sharing openly helps erode a bit of that stigma among friends, then so be it. In your nakedness, do not be ashamed. Do not despair. Cling on.