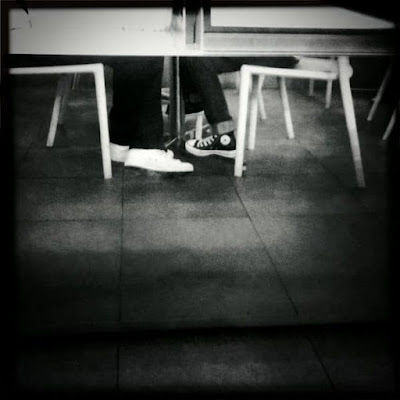 Capitalism is many things. One of the things about the capitalist world is its materialism, its “thingness” - literally the making, the desire and the possession of things. Our modern cities are organized around the ability to manufacture and acquire things, and in Singapore we continue to suffer this tyranny of malls.

J had many things. And not just things but “nice things”; things he carefully selected (and used) which brought him pleasure through their beauty and utility. They were not necessarily expensive but well made. And almost always beautiful. Nice.

I have been packing up and selling/giving away some of J’s nicest things. If I am lucky, I get to use/wear them myself. Repurposing, re-using, “recycling”! Some friends have been kind in adopting or helping to move some of these things on. Some friends have also been kind to also ask if I really don’t want to just keep these things as a memory or reminder of him. However much I dislike (cos Protestant and Asian!) the sense of self-indulgence and even self-pity associated with mourning, believe me that I am not trying to be stoic and unsentimental in “clearing out” his stuff. I am being practical because nice things should not go to waste - but also being sentimental, because J hates (and he would be stressed if so) for nice things to go to waste.

And of course, when a person close to you dies, the only reality that remains for you is not his presence in things, but his or her absence. Their absence is all there is. The absence of his person - his being, words, voice, actions, expressions, touch - he is not there; not here.

Friends, those of you who have lost someone very dear will perhaps relate to this. If there are things that are hardest to clear out from the house, they are likely to be the person’s most “insignificant” things. They are things you or him would have easily discarded in your daily life: a toothbrush, a shaver, a note, the stack of grubby T-shirts he wears at home, the pumice stone for the dead skin on his soles. These things now have no other value or utility other than the fact that they are - they were - his. They acquire a sudden value in the meager singularity of what they now represent - his absence.

In comparison, the objects or things that remain and retain their value independent of J - his presence or absence - they have a life beyond him as nice things. Even if these things were gifts on special occasions such as anniversaries or they reflected years of shared experiences, they are still more easily given away, cleared out, discarded, re-purposed.


Where does this leave us in our relationship with things, especially nice things that we buy and “accession” into our lives? You know that proverbial wisdom (biblical wisdom!) about “treasures on earth”... it is indeed wise. We do need things in our daily lives, practically speaking - tools, clothes, furniture - and using nice things are part of the natural pleasures humans are blessed with as creative beings. We gravitate towards beauty and excellence in spirit, form and function. So if you live with an awareness of death, which is also to live as fully in the present as you can, you will know that nice things are just that, nice things, wonderfully so. No more. And no less.
MissingJ personal