Showing posts from March, 2006
Show All 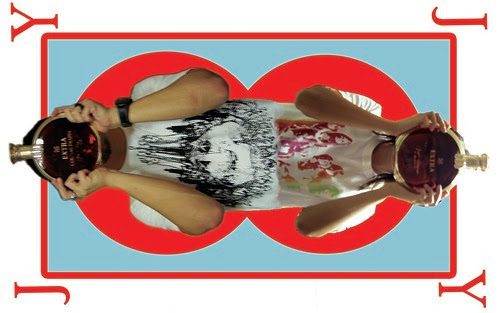 we found this fancy bottle of Cognac XO at Pa J's house, and checked out if the world would indeed look rosier filtered through its happy spirit Over the weekend Ma J returned to her home in a wheelchair from the hospital and received a visit from her youngest brother, the family jester (we amps are keen to inherit this role). Uncle Jester started it all by teasing Ma J on her resemblance to Lu Hsiu Lien . This triggered Pa J the opportunity to launch into one of his favourite topics..."THE EVIL THAT IS AMERICA". Uncle : Wah, when you go out, doesn't anyone stop you and say "Lu Hsiu LIen ah!" Pa J :[ smiles and nods wisely ] Yes...Lu Hsiu Lien... That Chen Shui Bian, won't last for long. Uncle : [ does an impersonation of the Taiwanese President, raises his fist and punches the air ] Pa J : But THAT AMERICA, they just want to split China up into 7 kingdoms. Y [ puzzled ] 7 kingdoms? Pa J : Macau, Taiwan, Hong Kong, Inner Mongolia, Tibet... all inde
7 comments
Read the rest of this post

it's no secret anymore

March 27, 2006
On our island, there are no secrets where good food is concerned. So in case you visit here but don't read tym's blog (which is unlikely I guess), I'm going to steal her post about our lunch at the restaurant at the Freemason Hall, Armenian Street. You may not know who their members are or what they do in the Hall, but you sure can know what it is they eat!
Post a Comment
Read the rest of this post

they came, lived, talked (and talked some more) 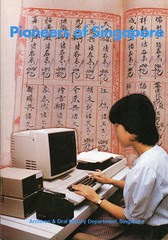 While having lunch with my colleagues at Earshot , the bookstore cafe at The Arts House at Old Parliament , I took the chance to scan its shelves of Singapore publications and music CDs...and came across this gem - Pioneers of Singapore: A Catalogue of Oral History Interviews (Archives and Oral History Dept, 1984 - now called National Archives of Singapore ). Check out this pre-Adobe Photoshop cover where you can see the crude edges of the cut-out lady/computer in foreground. To be sure, the book is nothing more than what it honestly states in its subtitle - a catalogue. It does not contain the actual stories. It is not a transcript of the recordings. It does not even have photographs of the interviewees. A colleague who flipped through its pages wondered why anyone would purchase this, well, boring book. Of course, there are fools like me. Try this extract on civil servant Mr Sng Choon Yee (b.1897): R01 Family background. Early education in Chinese classics. School fees. School
4 comments
Read the rest of this post 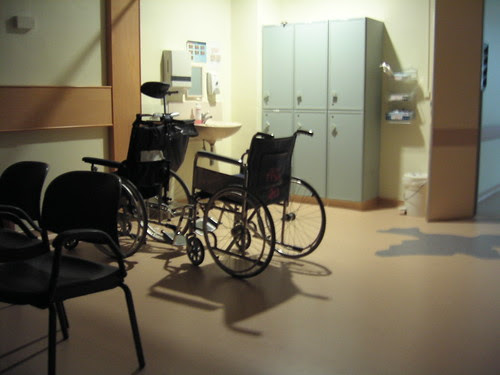 For the past month, this is what greets my mom every morning (and night), as she gazes towards the entrance of ward, eagerly waiting for her husband and children to turn up to be with her. Finally, after much "discussion", we got her a new, nice wheelchair (not the one in the pic). Mom, be strong, keep your eyes on Jesus, and walk down the road with no fear and regrets - TOHA/J
Post a Comment
Read the rest of this post 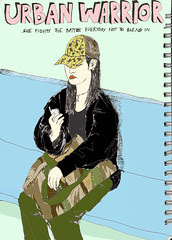 sketched on the train ride to the AMk hospital Walking across the Toa Payoh Lor 8 half of Mr Chiam's Potong Pasir ward, J and I cannot help but notice how worn out its pavements, lift lobbies, playgrounds and other public areas are one quiet Sunday morning. J : It really does look very old and in need of rescue. Quite depressing actually. Y : Yah, I wonder how someone living here might think... whether they are frustrated when they look across the road at the flats under PAP's town council. J : But old things are not necessarily bad. Y : Hmm, of course. But in Singapore, something old always looks so out of place. And - J : And the old things are actually broken. Y : You're right! That's probably why. It's because we take such little pride in them being old we don't actually let them age, we let them break down. Or maybe it is just the tropics. The heat, the humidity, the rainstorms - they leave us all - even the concrete - tired. So if Mr Chiam loses
Post a Comment
Read the rest of this post

from Gilead to Gomorrah?

Right after I sing praises of a quiet book about 3 generations of preachers set in the American MidWest, I get told this - that I'm closest to being a novel about "dandies, rich pretty boys...and decadent pleasure-seekers." Ah, how J would like a dandy wardrobe! This much I know ;> Which literature classic are you? Oscar Wilde: The Portrait of Dorian Gray. You are a horror novel from the world of dandies, rich pretty boys, art and aesthetics, and intellectual debates between ethical people and decadent pleasure-seekers. You value beauty and pleasure but realize their dangers, as well. Take this quiz !
10 comments
Read the rest of this post Gilead goats, image taken from BiblePlaces.com Though I've wandered around Jordan with a group of friends many years ago, I don't think we strayed to Mount Gilead (goats, however, we saw plenty of!). And I can't boast about my knowledge of the bible. So instead, the first time I came across the word "Gilead" was in a Cowboy Junkies song Seven Years , a dramatic sort of Western track about a father and his estranged son. My dreams are now filled with Gilead Trees And other sights that I've never seen Perhaps owing to it being the place King David fled to during the coup by his son Absalom, Gilead has become some kind of symbolic place of both refuge and regret, calm and storm. 2 weekends ago, I picked up Marilynne Robinson's second novel Gilead . I told you last night that I might be gone sometime, and you said, Where, and I said, To be with the Good Lord, and you said, Why, and I said, Because I'm old, and you said, I don't think you'r
Post a Comment
Read the rest of this post 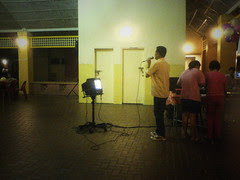 singing the blues- images by J Having lived in a house in a private estate most of my life, I've been used to stepping in and out of the house without seeing or having to greet any of my neighbours (with the exception of 1 Australian neighbour who seems to spend all her time gardening). J and I would walk around the estate some evenings and peer through the gates or above the walls into the expansive dark gardens and living rooms. We would guess - by the number of cars, the furniture, the presence of kiddy bikes, koi ponds and lap pools - what sort of life went on behind the dark windows. Yesterday marked my first month living instead in Toa Payoh Lor 8 . Ah yes, the heartlands . There, even taking the lift every morning has brought familiar faces. On the 6th floor live Ali and Ana, 2 adorable children of a good-looking hotel chef. On the 16th floor there's Geroge, a quiet bespectacled 10-year old who lives with his sister, mom and aunt. They live across from K, a jet-sett
3 comments
Read the rest of this post 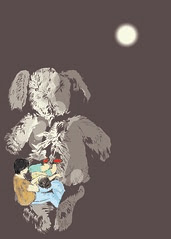 That's the claim of the Necessary Stage-M1 Singapore Fringe Festival which ended last week. a colour remix by J Having learnt no lesson about healing despite many evenings at the hospital (except maybe that you need patience), I abandoned J one evening for The Edge , a play at the Fringe Festival by young Thai company B Floor Theatre . A series of vignettes about society's false ideals of beauty, wealth, power and relationships, the mostly wordless drama was played passionately by the 5 or 6 young Thai actors/actresses, but painfully - painful in its literal interpretations of these ideals and in its trite conclusion that we only have to reconcile ourselves to the grand drama of life in order to find our place. I suppose art does heal. Sometimes, it plays doctor by trying to make explicit our sickness. Often, it becomes condescending in its diagnosis. Other times, it serves as an empathetic hospital bedfellow, providing company and conversation - an art humbled by compa
Post a Comment
Read the rest of this post 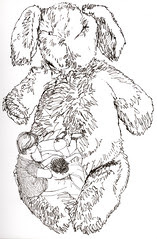 teach, do something worthwhile with your life

March 06, 2006
[ drawing coming up later... ] In the absence of books, films, art and daydreams that inspire during these past few weeks, I find myself enjoying more than usual these casual, meandering, sometimes nostalgic conversations with my family. And of the many stories about her childhood that my mother has told me (and re-told), this remains my favourite. Mrs L cannot remember when the Health Sciences class became her responsibility. A honours (distinction) graduate from the Malayan University in geography, there are days when Mrs L wonders how it is that she has fallen from high mountain tops to the darker, unclean regions of the human body and its earthly abode. But the principal did not fancy any of the male teachers teaching the young girls the correct way to wash their hands and brush their teeth and keep god-knows-where-else clean if their mothers had not already told them to. So here she was, an educated young woman of her time, called to join the men in leading the nation's
4 comments
Read the rest of this post J/TOHA's second post! ( The first was months ago.) I held my mom's left hand, the weak side, and asked if she could grasp my hand. She said it was impossible, and told us not to force her to try. "Don't give up. Keep focusing on it. Train your mind to understand that this is your hand, and you want it to move when you tell it to." "Don't force me lah." Deep down, I was a little disappointed by her response, but I couldn't help but to liken her situation to mine. Definitely not a fair comparison, but I felt, at that very moment, paralsyed. Not literally or physically, but my mind was numbed, blurred and confused. Life at work has just gotten worse. What's new, most of you who know me might say. I don't think I want to elaborate how bad it has gotten, but just take it that it is so bad I felt like tendering my resignation on the spot this morning. A month back, I had kind of decided that I would quit my job this May and to enro
13 comments
Read the rest of this post 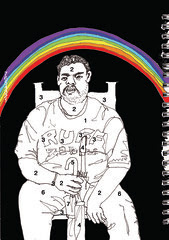 colour me please! ( click pic for a larger view in flickr )- a companion to this painting . These 2 weeks have left J and I completely drained by work, hospital visits, work, laundry and work. So I shall let this picture do its own talking...and let you, my dear friends, do your own colouring!
1 comment
Read the rest of this post
More posts