Showing posts from July, 2008
Show All

Com'on everybody let's do the Conga 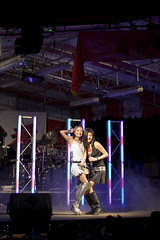 all images in this post by J (+) It is free. (-) You have to bring your own chair if you want a seat - otherwise, please just stand on the ankle-tingling grass. (-) You may not always get a clear view of the stage, especially if the guy beside you would have no qualms about stepping up and standing right in front of you instead. (-) It's the end of the day and not everyone has had a chance for a shower. Depending on the weather, you'll soon need another shower yourself. (+/-) There's enough sequin passing up and down the stage to cover every inch of a truck. (+/-) Some of the humour is fairly crude, but hey, it's funny. (+/-) There are 13 year-old girls in small silver dresses and boots belting out Hokkien heartbreak/life's-tough songs like this year's favourite 十二蓮花... followed by middle-aged men belting out other Hokkien heartbreak/life's-tough songs. (+/-) There're some parts of the audience present who believe that the actual, intended audie
Post a Comment
Read the rest of this post 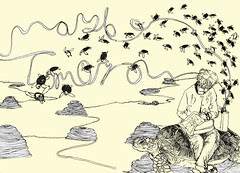 it certainly wasn't yesterday! It's been a long time since I felt like drawing my fellow train commuters. Last weekend, feeling more refreshed, I could not resist doing a quick sketch of a tiny old lady slumped in a corner seat (her outfit was too well colour-coordinated). J suggested the text Maybe Tomorrow : Y: Hmm, yes... Procrastination - I like! It works well with the baby turtles suggesting longevity and the start of new life - so why must we always hurry? J: Oh, what I thought was more like she was telling herself that she would live just another day, to die maybe tomorrow, but not today. Y: ...ah. That same weekend we celebrated Grandma Y's 88th birthday. She no longer remembers who she is. She barely remembers any words. She holds on to the angbao I gave her, but only for a moment, returning it to me with the words - "koochi koochi koochi". Friends, at the end of it all, so little remain, so little matter.
Post a Comment
Read the rest of this post 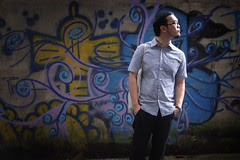 bye, youth and imagination It's been a while since I last took a day off work to spend with J. It's either age or the lack of imagination (or both) such that when we had a chance to spend the day together last Friday, we were both somewhat at a loss as to where next to explore. After brunch at our favourite Killiney Road kopitiam , for want of somewhere to go, we started to wander along Killiney Road. J was in no mood to test the gurkha guard at Dublin road , hence we just continued walking - place one foot ahead of the other, feel the ground. bye, Xiao Kang After the row of shop houses, there were the gates of the condominiums - and a quiet driveway soon appeared, lined with cars parked illegally under the wise, dense shade of banyan trees. Of course, the legendary Mitre Hotel! (flickr photos here ) There was graffiti all along the wall of the driveway, at the end of which the two-storey building stood, now truly abandoned. In February this year, the courts had ruled that th
2 comments
Read the rest of this post
More posts