Showing posts from July, 2012
Show All

no time to listen to you 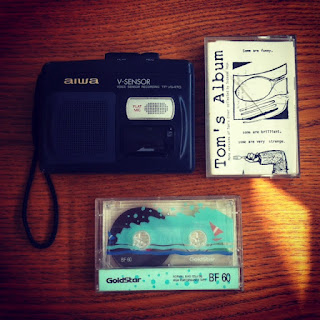 The only cassette player and 2 cassettes in the house. J still has his Aiwa portable CD player, stashed away somewhere in the cupboards. Music, the most sublime of arts. Or at least according to the romantic philosopher Schopenhauer. The last few years I've grown somewhat distant from music. Perhaps it has been crowded out from my mind - among many other precious things. Or perhaps music, as J speculated, has become too much part of our digital experiences and disconnected from the other frequencies of living - motion, touch, taste, sight. Re-arranging the CD collection, examining the booklet of lyrics and its art, rushing to the store when an album has first been released, popping the CD or tape into the player while the tea stews, making sure the batteries in your walkman are alive before you step out of the house... The albums that accompanied me when I was a young(er!) person walking alone around various parts of our island during all the school and university term rem
Post a Comment
Read the rest of this post
More posts