Showing posts from February, 2007
Show All

out of sight, out of mind

工喜發財，烘包兩個來！ All images in this post by J It seems apt that the annual budget debates is taking place in the midst of the Chinese New Year fortnight, what with the festival's associations with goodies and handouts. But the prime minister gave a CNY message on the family, to balance and reinforce instead his government's other favourite message - that the family is the "basic unit" of society. Hence if you do run into trouble, look not to the state as your first line of defence and assistance, look to your family. Of course, the prime minister's own family can give him such assurance. His dad, wife, sister and brother... there is really no need to elaborate. But things are not always as the prime minister would have it. This CNY will be the first spent with Ma J confined mostly to her bed and all of J's siblings in various states of unspoken annoyance with each other. Still, a Reunion Dinner was a must. Hence, there being no healthy cook or resources
6 comments
Read the rest of this post

some days are poetry 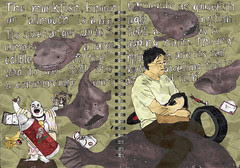 completed after time stolen from many late nights But most days are prose. Maybe because work at the office seemed to have suddenly doubled, there's the occasion for reading poetry again. Poetry can find a small place in the head, stay there quietly until called for. For this reason, I like those "minor poets" best - folks whose work never seemed to have been caught up by the powerful forces of history and politics; they are admitted to the canon but not for being definitive. Doors are not made for them. They slip in when, by chance, a window opens. I guess we are often caught sometimes by the spectacular and trascendent, and sometimes tempted by the mundane and quotidian. Ah, the occasion for such reflection is this , or rather the year that has now passed. And as if some pattern should form, today Ma J gets admitted into hospital for the 4th time since her stroke. To be sure, nothing much has changed since I moved in with J. Probably because he has been living i
2 comments
Read the rest of this post 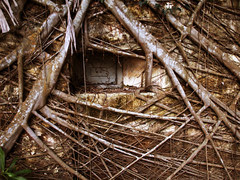 an angkor wat-looking place in Singapore! - All images in this post by J/TOHA ...how would you describe the country of your youth? Saturday afternoon at a forum organised by The Tangent on student life and activities in the 1945-55, J and I heard Professor Koh Tai Ann from the English division of the Nanyang Technological University and (ex)journalist Mr Han Tan Juan do just that. Held at the 16th floor of the new National Library Building, the 2 speakers spoke with their backs to an amazing panaromic view of the city- and as they spoke, one could almost imagine the buildings and landscape behind them shifting, the shoreline that moves further and further away from us. Level 16, caught not listening to the speakers Theirs were seemingly contrasting stories. Prof Koh would declare themselves as 2 worlds in 1 country. His was the personal, enlarged by the historical - though perhaps overwhelmed. And hers was also the personal, made to seem small by the historical - though
6 comments
Read the rest of this post 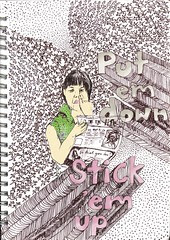 I wished there can be a more elegant title for this post or that there was more to this picture. But it is late, so. Lizard poop is impossible to clean. I mean, what do they eat? Glue? Friends, all that I wish for you and I is a restful weekend. A time to think, reflect and wonder.
3 comments
Read the rest of this post
More posts