Showing posts from November, 2007
Show All

in for the long run 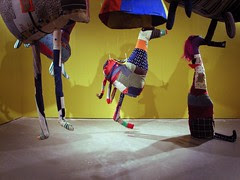 maki squarepatch's child's room - images by J Tuesday evening J and I trooped to a nighttime preview of the Singapore Design Festival "hub" at the City Hall and former Supreme Court building. I'm really not going to comment on the Festival, except to say that it's worth going to take a look at the exhibitions there because: (1) they made these - J and I found installations by...not 1...but (at least) 4 female Singapore designers at a show called "Utterrubbish" (hmm, yes, I'm also not a fan of this title). There's a child's room by maki squarepatch , a living room of recycled fashion by Hansel , a small showcase of poetic works by our favourite argentum in one of the judge's rest chambers, and in Court Room 21 is an installation by a new friend, the inimitable kwodrent . Hey, I know it's not about gender, BUT. works by argentum work those legs in the city hall (2) you get to wander around these buildings Not many
Post a Comment
Read the rest of this post 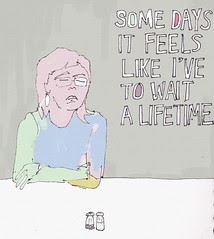 I drew and painted this today. The last drawing was 3 months ago. This year I made 16 illustrations. Last year, at least 60. This year I wrote 0 stories. Last year, there was, at least, 1. This year, I spent an average of 12 hours at the office, and maybe 1 hour outside the office thinking about work each day. For that, my bank account and paycheck boast of slightly bigger figures. Last year, I spent more time walking and talking with J and our family - and maybe even with friends. I'm not sure if these past 2 years were placed side by side, both sides of the equation would add up just right. But the truth - even if excuses are easy to find - is that whatever the numbers stand for and however they are valued, they reflect our choices.
4 comments
Read the rest of this post

Cover illustration by Eileen Chang/Zhang Ailing for her own book 流言 (trans. Rumour) There are 3 reasons to watch Lust , Caution , and for this I shall quote the folks sitting around, beside and behind J and I in the cinema on Saturday. [warning: spoilers ahead] (1) "[gasp]...so cute" Even the dogs, cute white ones or saggy-faced Alsatians, play their role well. Every single member of the cast was superb. (2)"Wah, Louis Vuitton ah" This film being set in wartime Shanghai and Hong Kong, the costumes (and yes, the suitcases were beautiful too) and art direction are excellent. But because the film could be seen as a play within a film, starting first with the group of over zealous students taking their anti-Japanese play too seriously beyond the stage to the dangerous real world and eventually going undercover as spies for the resistance, the idea of stage and reality, deception and truth gets, a fabricated reality vs real life drama require elaborately set up a
3 comments
Read the rest of this post 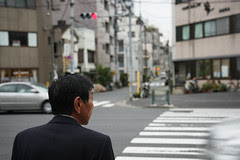 all images by J - click for flickr view We called it a magic street. But there's nothing Harry Potter-ish about it all it. In fact, there's nothing very magical, not even in the metaphorical sense of the word. I've forgotten why we called it a magic street. The street leads to the Museum of Contemporary Art Tokyo. In both our visits there, 4 years apart, the street barely changed - at least in our memory. Both visits were between 4-5 in the late afternoon. In Autumn, the light would have started to change. At that hour, there would be kids who have stayed on a little later in school rushing home; maybe one or two housewives would go by on their bikes. But save for these bodies, and even quieter ones in the slow neighbourhood shops, the street was mostly deserted. We are greedy anomalies on this street, stopping every few steps for photographs, to decipher signs, stare at shop windows, and both times for yakitori, eaten at a bench outside the shop - nonetheless, qu
2 comments
Read the rest of this post
More posts